The Centre for Human Rights Education’s Salem Askari and Associate Professor Caroline Fleay were panellists on the plenary session ‘Power of One: Refugee Health’ at the Global Health Conference organised by the Australian Medical Students Association in Fremantle, Western Australia, on 6 August 2021. 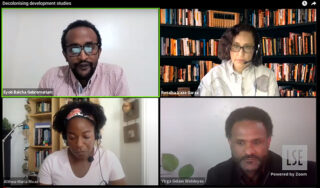 Dr Woldeyes presents for the London School of Economics

On 27th July 2021, Dr Yirga Gelaw Woldeyes presented for an international webinar organised by the London School of Economics (LSE), hosted by the Firoz Lalji Institute for Africa and the Department of International Development. The title of the webinar was Decolonising Development Studies: Practical steps in course designing, reading selections and classroom discussions.

“Questions about how to decolonise university courses and research has a special pertinence when it comes to development studies, which responds to ideas and theories in development practice itself – often viewed as an inherently colonial project. How these issues should be addressed remains contentious, and pockets of reform within higher education appears marginal.”

The event sought to build on the lessons and challenges of teaching African Development using decolonial perspectives in the current academic year at the LSE, International Development Department, and what this may mean for other disciplines.

You can watch the full webinar on YouTube here. 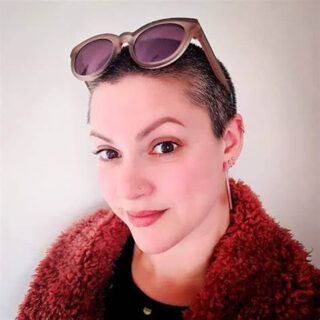 In the panel discussion with Misty and audience members, Misty says they did not label themselves at first, noting it was because the terms weren’t available in the 80s and 90s. They noted that there is a history of activism and advocacy around bisexuality, saying they also use the terms pansexual and queer in some spaces. As part of their PhD research, Misty has surveyed around 800 people who identify as non-binary on sexuality or gender or both, noting their survey found over 90% of people identified as being attracted to more than one gender while over 60% said they didn’t identify as a man or a woman or all of the time.

The Insight program reached an audience of approximately 405,000 and was shown nationally television and online.

Dr Marilyn Metta featured on the Behind the Curtin Podcast series

Behind the Curtin are a series of podcasts released monthly, produced by the Learning Innovation and Teaching Excellence Centre (LITEC) at Curtin, where staff get to hear from academic staff on a topic of their choice. Topics support the academic’s research and interests but isn’t necessarily focused on learning and teaching.

In the July podcast, the Centre for Human Rights Education’s Dr Marilyn Metta is featured and she talks about a community-led project that aims to engage young people in conversations about safe relationships.
“The project involves a series of interactive workshops that incorporate a range of creative storytelling and information-sharing resources and media for young people to explore challenging but important issues around sex, sexual harassment, coercive control, intimate abuse, and safe relationships.”

The Centre for Human Rights Education’s Research Assistant Salem Askari gave a powerful presentation at the Refugee Alternatives Conference on 6 July 2021 on the experiences of living on a Safe Haven Enterprise Visa in Australia for more than 8 years, and what should inform advocacy in this area moving forward. 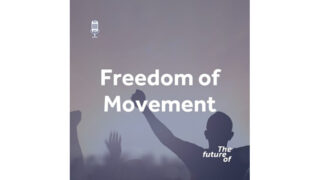 The Future of... Podcast

Co-Directors of the Centre for Human Rights Education, Associate Professor Caroline Fleay and Dr Lisa Hartley were interviewed for an early July edition of The Future of… podcast series, titled ‘Freedom of Movement’. The researchers discuss why the right to move is so important, how COVID-19 lockdowns have restricted our ability to move and how this right is often unequally experienced. The episode was recorded live on Curtin University Open Day on Sunday 30 May 2021 and broadcast on the 6th of July 2021. 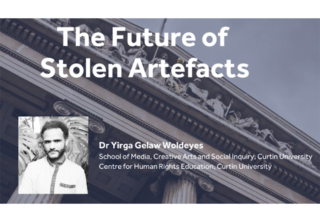 The Future Of: Stolen Artefacts

CHRE’s Dr Yirga Gelaw Woldeyes, an expert in colonialist epistemic violence research, joined Jessica Morison in Curtin’s latest ‘The Future of… Series’ podcast that was aired on 24 June 2021. He describes the types of artefacts that have been stolen, why museums are starting to repatriate these artefacts and how their return will influence future interpretations of history.

You can listen to the full episode via YouTube.

Centre for Human Rights Education (CHRE) Research Assistant Salem Askari spoke powerfully at the Refugee Week in the City event held at the Wesley Uniting Church in Perth on Monday 21 June about his own experiences of seeking asylum in Australia and how we need to challenge Australia’s policy landscape. He joined a range of speakers, including newly elected MLC Ayur Makur Chuot. 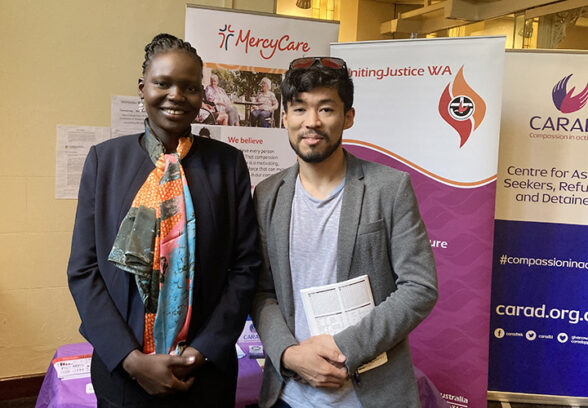 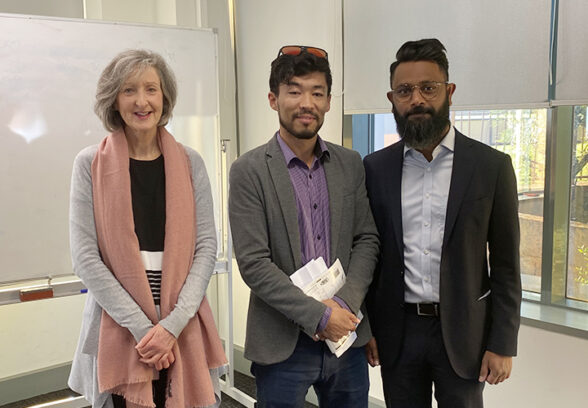 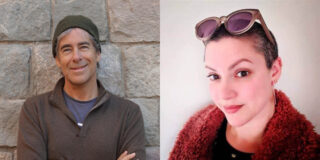 Congratulations go to Emeritus Professor Baden Offord who received an AO award, Officer in the Order of Australia, announced on the Queen’s Birthday 2021 Honours List. He’s one of only 50 recipients nationally to receive the award. Baden has been recognised for distinguished service to tertiary education in the field of human rights, social justice, and cultural diversity. We congratulate Baden for the recognition of his work as a human rights scholar, activist and educator. The Centre for Human Rights Education and the Curtin University community were honoured to have Baden for 6 wonderful years.

Congratulations also go to Mx Misty Farquhar, who received a Medal (OAM) of the Order of Australia. Misty is a sessional academic and PhD researcher with the Centre for Human Rights Education and received recognition for their service to the LGBTQI community. We heartily congratulate Misty as an integral part of the CHRE team, outstanding advocate and all round amazing human. 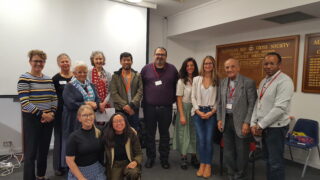 Seminar at the Red Cross (WA)

On 11 June, CHRE co-directors Lisa Hartley and Caroline Fleay facilitated a seminar at the Australian Red Cross (WA) about how to engage in ‘difficult conversations’ with individuals and Members of Parliament to shift opinions about people seeking asylum. Special thanks to Greg Watson and Alison Cook from the ARC for the invitation and to the thoughtful and insightful participants. Many of the participants are involved in the “In Search of Safety” program which is run in schools in WA about people seeking asylum. Lisa and Caroline evaluated this program which resulted in a peer-reviewed publication published earlier this year.

In early June, Dr Lisa Hartley and Associate Professor Caroline Fleay enabled a fruitful meeting with women from refugee backgrounds who are involved in their collaborative research-led advocacy project examining barriers to accessing higher education and employment pathways in Australia, with Jacqui Wheelan from Mercycare WA. Jacqui is running a project designed to provide refugee and migrant women in WA with job pathways support. 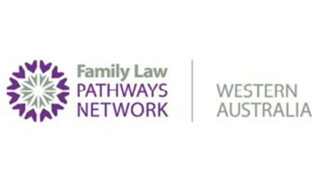 On 25th May 2021, Dr Marilyn Metta was invited to give the keynote presentation titled, Living with Intimate Abuse and Coercive Control and Navigating the Family Court System at the WA Family Law Pathways Network 2021 Conference . This year’s theme was Shaping the Future of Family Law: Ideas, Innovation and Inspiration.

On Thursday 18 March, the Centre for Human Rights Education held the first in their 2021 Research Seminar Series with Dr Marilyn Metta as the speaker. At the seminar titled, ‘Unpacking Coercive Control: Seeing, Understanding and Acting,’ Marilyn unpacked what coercive control looks like in the contexts of intimate and familial relationships and workplaces.

Drawing from her current research project, Finding Metis: Women’s Stories of Resistance and Resilience through Intimate Abuse and Violence, she explored some of the lived experiences of culturally and linguistically diverse (CaLD) women who have experienced intimate abuse and coercive control as well as how they have resisted the coercive control and abuse.

The lunchtime seminar was well attended on campus with 26 people and 34 people attended online via Zoom and Facebook Live. Thanks to Marilyn for presenting on a very timely topic that was very invaluable and well received by those in attendance. 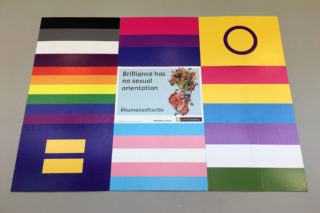 PhD candidate Misty Farquhar interviewed for ‘The Future Of’ podcast

Curtin’s latest podcast in the “Future of” series from 15 March 2021 features Mx Misty Farquhar speaking about Gender. Misty is a CHRE sessional academic and PhD candidate. They discuss gender diversity, inclusivity & the right age to transition.

Listen to the podcast here.

Questions raised during the podcast include: 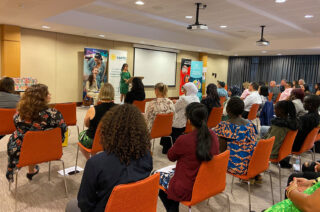 On the 13th of March, Dr Marilyn Metta was a guest speaker at the Community Innovators, Volunteers and Leaders (CIVAL) Group 2 graduation that was held at the City of Wanneroo Civic Centre. There were 38 graduates who completed the CIVAL program which is run by the Association for Services to Torture and Trauma Survivors (ASeTTS). The group included participants from 22 different countries who have learnt new skills to help them support their community members in the future.

Marilyn was also recently interviewed by RTRFM (Perth) On The Record on the Feeling Safe and Free Initiative which uses creative storytelling tools and media for young people to explore important issues relating to sex, sexual harassment, consent, abuse and safe relationships.