The Centre for Human Rights Education (CHRE) and the School of Media, Culture and Creative Arts (MCCA) will commence a new research project, Our stories, our way: collaborative methodology for Indigenous oral history, in 2016.

This project is led by Dr Elfie Shiosaki, John Curtin Distinguished Professor Anna Haebich and Dr Michelle Johnson in partnership with a team of researchers from the University of New England, the University of South Australia and the National Film and Sound Archive.

Oral traditions in Indigenous communities are framed by unique Indigenous epistemologies. This project aims to empower Indigenous people to record their own stories as oral histories in their own way. The research team will work to reframe methodology for Indigenous oral history by giving greater recognition to Indigenous ways of knowing.

This project will support a research symposium and workshop on collaborative methodology for Indigenous oral history at Curtin in May 2016. These research activities will contribute to CHRE’s Reimagining Australia pre-conference series in the lead up to the International Australian Studies Assocation (InASA) Conference to be held at the Maritime Museum in Fremantle on 7-9 December 2016.

Dr Elfie Shiosaki has been appointed as an Associate Investigator at the Australian Research Council Centre of Excellence for the History of Emotions (CHE) in 2016.

CHE leads research worldwide into how societies thought, felt and functioned in Europe, 1100 – 1800, and how this long history continues to impact on present day Australia.

Dr Shiosaki’s research at CHE will explore how emerging narratives of Indigenous political autonomy, strength, courage and resilience have the potential to overcome the enduring legacy of dominant colonial narratives. Her research aims to unearth a hidden treasury of knowledge about early political activism by many Noongar people in Western Australia from the turn of the twentieth century until the 1930s, restore this knowledge to the Noongar community as invaluable cultural heritage and explore the legacy of this rich history of activism for future generations.

CHE was established in 2011 under the ARC Centres of Excellence Program. Its research is based at the Universities of Adelaide, Melbourne, Queensland, Sydney and Western Australia.

The project was highlighted in a Curtin media release on 23 November 2015:

‘A new project led by Curtin University researchers, in collaboration with the Nyungar community, aims to produce the first account of writing by Nyungar people held in the Western Australian archives and covering the period from 1860 to 1960.

John Curtin Distinguished Professor Anna Haebich, of the School of Media, Culture and the Creative Arts, said the State’s collection held a treasury of knowledge about writing by Nyungar people. This knowledge had been passed down in oral history, but was not widely known.

“Looking at the period from 1860 to 1960, the project’s significance lies in uncovering seemingly hidden knowledge about activism by Nyungar people which has been silenced in the past,” Professor Haebich said.

“Working closely with the Nyungar leaders to bring the letters to the community and the writers’ families, we hope to transform this writing into invaluable cultural heritage for the emerging Nyungar nation.”

The Ancestors’ Words project aims to develop an ethical model for research in the Nyungar community. The research team will work in close partnership with a Nyungar working group, members of which include Nyungar elders and representatives from community organisations.

Professor Marion Kickett, Director of the Centre for Aboriginal Studies at Curtin and a member of the working group, said the project would showcase the significance of the past writings by Nyungar people.

“This project will highlight many stories of dispossessions, intelligence and an enduring resilience that sustained many and deposed others; these tales of survival are a valuable legacy,” Professor Kickett said.

Mr Kyle Morrison, Artistic Director of the Yirra Yaakin Theatre Company, is another member of the working group. He said the research project could also provide possibilities to engage Nyungar youth in new, creative projects.

“The letters are performative in nature and a cross-generational symposium would be a perfect way to skill share and workshop a variety of performance ideas and outcomes,” Mr Morrison said. 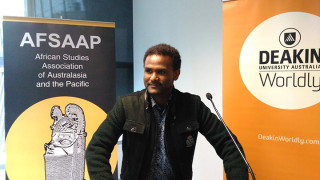 Dr Yirga Woldeyes, speaker at the African Studies of Australasia and the Pacific Conference

Dr Yirga Gelaw Woldeyes, a lecturer at the Centre for Human Rights Education, participated in the 38th African Studies of Australasia and the Pacific (AFSAAP) Conference that was organised at Deakin University, Melbourne, from 28th-30th October 2015. The theme of the conference was ‘21st Century Tensions and Transformation in Africa’. Yirga participated by presenting a paper entitled, Beyond decoloniality: Towards the creative incorporation of diverse knowledge-traditions in Africa. He also chaired a session, and spoke at the plenary session at the conclusion of the conference on the Future of African studies in Australasia. The next AFSAAP conference will take place in Perth in 2016.

For more information about the conference program, click here.

Karen is an international researcher in the field of disability studies and her research work has been published widely in some of the world’s leading international social science journals in the area. She has successfully edited a number of leading international journals and has three forthcoming international edited volumes with Routledge (2014) and Springer (2015). Her research work builds upon her extensive policy experience working inside government on national disability policy priorities, undertaking major state programmatic reforms involving research, public consultation and program implementation (2002 – 2010). She co-founded The Australian Sociological Association’s (TASA) – Critical Disability Studies Thematic Group (2008) and in 2012, was elected as the National Post Graduate Representative of TASA for a two year term (2013-2014). Thus, she is internationally renowned for her to commitment to capacity building strategies that support long term sustainable institutional change for greater impact. (Source: http://www.csi.edu.au/about-csi/our-people/karen-soldatic/)

Her awarded project intends to examine how four regional centres navigate the socio-economic challenges of an increasing Indigenous disability population in a context of national reform. Across OECD (Organisation for Economic Co-operation and Development) countries, including Australia, disability income support policy has become central to national economic policy. Australian regional centres are experiencing growth in their Indigenous disability populations at a time of significant policy change. We do not know how regional communities respond to these policy changes, nor do we understand how national disability income support policy affects the socio-economic wellbeing of Indigenous persons with disability. This project aims to address this knowledge gap and potentially inform regional and national disability policy for Indigenous Australians. (Source: https://rms.arc.gov.au/RMS/Report/Download/Report/a3f6be6e-33f7-4fb5-98a6-7526aaa184cf/6) 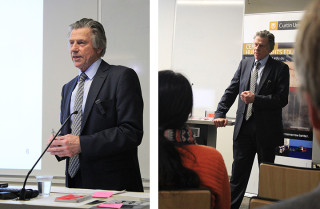 On 19 October 2015, in celebration of Nonviolence Month 2015, the Centre for Human Rights Education (CHRE) hosted a public lecture with Emeritus Professor Magnus Haavelsrud from the Norwegian University of Science and Technology titled, ‘Practicing nonviolence in education’. The event was supported by the Faculty of Humanities and was attended by just over 40 people at Curtin University, including the President of the International Centre of Non-Violence (ICON) Australia, Mr Gambhir Watts OAM, who through ICON introduced Nonviolence Month in 2014. Professor Haavelsrud has been the Patron of ICON Australia since 2013.

After refreshments in the foyer and an introduction to the evening by Professor Baden Offord, Director of the CHRE, he then introduced the Professor who spoke about the transformative power of nonviolence that has been evidenced in so many contexts and by so many – most notably in the work by Mahatma Gandhi and Martin Luther King. In his lecture, Professor Haavelsrud focused on the question of what is the pedagogic foundation for acquiring a nonviolent identity, and searching for answers as to how nonviolence can be learned and practiced in education in all spheres of life.

The floor was then opened for questions from the audience, which provided a lively and in depth discussion. Thank you to Gambhir Watts and ICON for bringing Professor Haavelsrud to Australia, and to Kristy O’Reilly from Curtin Corporate Events for her assistance in organising the lecture. Thanks also go to Nilesh Makwana from the Borderless Gandhi Project for his help in hosting Professor Haavelsrud while in Perth.

You can listen to the Professor’s lecture online by clicking here. Please use earphones for optimal sound quality. 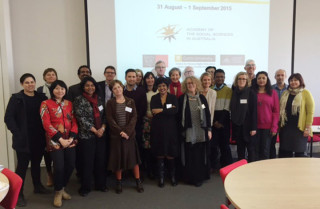 Centre for Human Rights Education’s (CHRE) Dr Caroline Fleay and Dr Lisa Hartley co-convened a workshop in Melbourne on the 31st of August and 1st of September 2015, on the regional impacts of Australia’s asylum seeker policies with ANU’s Professor William Maley and with the support of Swinburne University’s (and CHRE Adjunct) Professor Linda Briskman. The workshop was attended by academics and representatives of refugee support agencies, refugee communities and the UN High Commissioner for Refugees from Australia, Indonesia, Malaysia and Sri Lanka.

The purpose of the workshop was to document and explore the impacts of Australian policies in Indonesia, Malaysia and Sri Lanka, particularly on asylum seekers and refugees, since the commencement of the Abbott Government’s Operation Sovereign Borders (OSB). Since 2013, OSB has introduced measures aimed at intercepting and deterring the arrival of asylum seekers via maritime routes. This has led to Australian operations with Indonesia, Malaysia and Sri Lanka to disrupt people smuggling activities and increase intelligence operation.  It also includes the turning back by Australian naval personnel of asylum seekers, mostly to Indonesia, and the prevention of the arrival of other boats with the assistance of authorities in Indonesia, Malaysia and Sri Lanka. Throughout the two days, research papers and reports were presented by delegates that outlined a range of disturbing impacts that Australian policies are having in the region since the commencement of OSB.

One of the outcomes of the workshop will be a public report that provides an overview of these findings – this will be made available next month so watch this space.

Breaking the Logjam: LGBTI Human Rights in Australia and Asia, The Pacific and Indian Ocean with the Honourble Michael Kirby

On 27 March 2015, the Centre for Human Rights Education, Living Proud LGBTI Community Services of WA and Q Life hosted a public forum with The Honourable Michael Kirby AC CMG titled, ‘Breaking the Logjam: LGBTI Human Rights in Australia and Asia, The Pacific and Indian Ocean’. The night was well attended with a full house at Curtin University.

After an introduction to the evening by Professor Baden Offord, Director of the Centre for Human Rights Education, a Welcome to Country was conducted by adjunct Professor Len Collard from the University of Western Australia. Curtin Vice Chancellor, Professor Deborah Terry, then introduced the Honourable Michael Kirby who described the origins of legal oppression of LGBTI people in Australia and our region.

The floor was then opened for questions from the audience. If you would like to watch the presentation, please click here. Please note that the presentation begins 9 minutes into the recording.