The Centre is very pleased to be part of an international community of scholars, researchers, educators, practitioners and activists.

Previous visitors to the Centre have included:

Dr Debra Dudek, Senior Lecturer in the School of English Literatures, University of Wollongong, Australia, and Director of the Centre for Canadian-Australian Studies, was a visiting researcher with the Centre for the first half of 2017. Debra participated in the Centre’s Research Seminar Series by giving a presentation titled, From ‘Boy Overboard’ (2002) to ‘The Bone Sparrow’ (2016): Refugee and Asylum Seeker Activism in Australian Fiction for Young People. 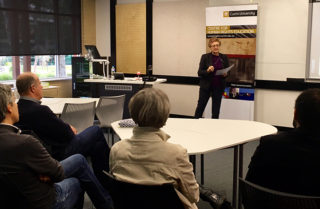 Dr Nina Burridge, Associate Professor in the Faculty of Arts and Social Sciences at the University of Technology, Sydney, visited the Centre for a week in September 2016. She gave a research seminar entitled ‘The Value of Human Rights Education at University’. 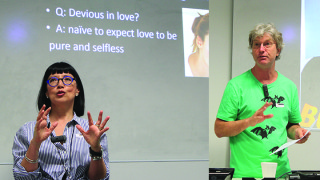 Dr Sonia Tascon, Lecturer in Social Work and Sociology, Sunshine Coast University visited the Centre for a week in October 2015. She participated in the Social Change and Activism Mini Symposium.

Dr Rob Garbutt, Senior Lecturer in Cultural Studies, Southern Cross University, visited the Centre for two weeks in October 2015. He participated in the Social Change and Activism Mini Symposium and gave a research seminar to interested scholars on his research, A Stutter in the Landscape.

Professor Baden Offord, Co-director of the Centre for Peace and Social Justice at Southern Cross University, visited the Centre for one week in July 2014. He gave a research seminar on Human Rights in the Anthropocene.

Professor Nicholas Procter, Chair: Mental Health Nursing, University of South Australia, visited the Centre at the end of 2013. Professor Procter was keen to explore possible research links with the Centre in the area of refugees and asylum seekers, which would include co-publications and possible future research applications. He also offered assistance to the CHRE in developing a research and funding strategy.

Chloé Jarosz, a French student, as part of her fifth-year at the Institut d’Etudes Politiques de Toulouse (IEP), did a sixteen-week internship at the Centre from February to June 2013. Her research looked at ‘Challenges of research and advocacy about asylum seekers and refugees’ which followed on from her involvement with a project launched by Madame Laure Ortiz about the situation of illegal migrants within Toulouse region in France. You can read her internship report [PDF] 1MB.

Naomi Shirin was on an AusAid internship with the Centre and conducted research on Indigenous groups in Bangladesh and refugee issues in Australia in 2010.

BaoAi Wang, Associate Professor, Department of English at Shanxi Institute of Economics and Business in China, was a Visiting Fellow at the Centre for twelve months in 2010.

Mary Anne Kenny from the Faulty of Law at Murdoch University joined the Centre as a Visiting Fellow in 2010.

Anna Haebich, Research Intensive Professor at Griffith University joined the Centre as a Visiting Fellow in 2010.

Giulia Capellazzi from the University of Bergamo in Italy was an intern with the Centre for a six month period in 2010 to conduct research on Indigenous issues in Australia.

Mariko Akuzawa, Keiko Yokota and Linda Sun, all academics in Japan, visited the Centre in August 2007 to gain firsthand experience of our Masters programs with a view to integrating human rights more fully into courses in Japan.

In June 2007 the Centre hosted a twelve person delegation from the National Human Rights Commission in Korea.

Associate Professor Khadija Khaja (Social Work, University of Indiana) spent two weeks at the Centre in 2007 during which time she delivered several public lectures addressing female circumcision in emigrant communities, experiences of Muslim women in the US following the terrorist attacks in 2001, and cross cultural human rights research.

Professor Randy Stoecker (University of Wisconsin) visited briefly in April 2007 to talk about his research with communities in change, and the change process in particular dealing with conflict and confrontation. Randy’s work attracted people from diverse disciplinary backgrounds.

Professor Ailsa Watkinson (University of Regina, Canada) spent 6 months with the Centre in 2005/2006 whilst on sabbatical. Ailsa’s main two areas of interest are children’s rights (in particular abolishing corporal punishment) and the rights of women in prisons. Ailsa is President of the Canadian Association of Elizabeth Fry Societies. During her time in Australia Ailsa was working on a forthcoming book addressing the rights of the child.

Professor Johan Galtung (Transcend Peace University) is an internationally renowned scholar and practitioner in peace studies and conflict transformation. Prof Galtung was awarded the prestigious Haydn Williams Fellowship in 2005 and spent 3 months at the Centre writing a book about peace and human rights.

Dr. Val Clarke (Social Science, University of Newcastle [Aust]) visited the Centre in 2005 to conduct research into volunteers and asylum seekers. Val’s research interest arises out of her work at the Asylum Seekers Centre in Sydney.